A Guide to Yorkshire Rivers

3-channel video projection synchronizing the flow of the Aire, Wharfe and Ouse from their sources to confluence in the Ouse Estuary 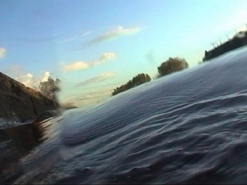 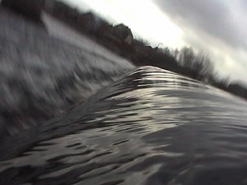 Originally commissioned as a 2-part work for the exhibition One Landscape Many Views at Cartwright Hall Art Gallery, Bradford 2003

The full 3-part version was premiered at Harewood House, Leeds in 2005 and received its first public showing at Impressions Gallery, Bradford, July 2006 as part of Bradford Inspired festival.
The work has also been used as a basis for choreography in the dance work What the Water Whispers, produced by Crimson Coast Dance Society, Nanaimo, Vancouver 2013:

‘This work integrates projected film by U.K. artist Simon Warner which is split between screens to create a multi layered view of rushing water. The set design moves from suspended, soft, textural forms to architectural images that reflect light as mountain tops, sails in the sun or even glass buildings. The images, viewed together in context, are as rich as the forest, as moving as the rivers themselves and offer an opportunity for the audience to place themselves in a poetic environment.’

The films were shot with remote cameras mounted on a radio controlled model boat and raft, juxtaposed (in the case of the Wharfe) with high altitude footage from an airship.