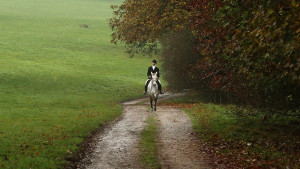 Shown in the Watercolour Rooms on the State Floor of the house, alongside the depictions of Harewood by Turner, Cotman, Girtin and Roger Fenton, this show is a centrepiece of the ‘Great Capabilities’ season celebrating  Capability Brown’s 300th anniversary.

My films, shown side by side on 2 monitors, recreate Capability Brown’s original carriage drive to the house, contrasting the grandeur of this with the intimate, private Northern Pleasure Grounds that incorporated Harewood’s medieval church and castle.