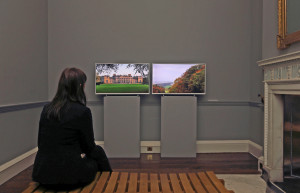 This specially-commissioned 2-channel film installation explores contrasting sides of the Harewood Estate.  Shown in the Watercolour Rooms on the State Floor of the house, it joins celebrated depictions of Harewood by Turner, Cotman, Girtin and Roger Fenton.

The synchronized films recreate a journey on horseback along Capability Brown’s original carriage drive to the house, contrasting the grandeur of this with the intimate, private Northern Pleasure Grounds that enfold Harewood’s medieval church, castle and 18th century architectural features. 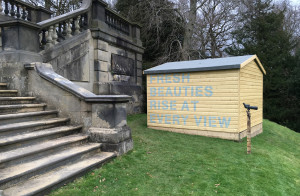 The shed incorporates a camera obscura producing a dreamlike, inverted, 4-foot square view of the lake and parkland, whilst outside a telescope enables close-up examination of wildlife and distant features.

What did Capability Brown actually do at Harewood? This series of walks allowed visitors to explore the estate in the company of the great man himself, to see how well his work has survived 250 years of landscape change. Taking in the lake, lakeside trees that were part of his original planting scheme, and the site of the old manor house of Gawthorpe, the walk ended on the Terrace where Mr Brown pointed out features of the view to the south, one of his finest achievements. 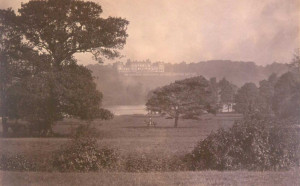 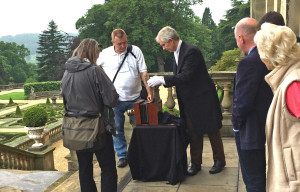 Performative walk around the sites of Roger Fenton’s 1859 Harewood House photographs, in the company of photographic historian Brian Liddy, former Associate Curator at the National Media Museum. An introductory talk in the Watercolour Rooms of the House (where rare examples of Fenton’s Harewood photographs were be on display) was followed by a guided tour  in the company of the great Victorian photographer, taking in the actual spots where he originally set up his tripod and camera.